Sheila and I began our caravanning hobby more than 55 years ago, shortly after we were married in 1963. We were both teachers and to go with our new Sprite Musketeer, we splashed out on a 1964 Ford Cortina Estate. The prices of those two items seem ridiculously low compared with today’s prices – the Ford Cortina cost £700 and the Musketeer was £300 – but even so, we had to resort to hire purchase over two years to pay for them. Our first daughter was born the following year and right from the start we caravanned with her. On some Friday evenings, as soon as we were home from work, we quickly packed and set off for a weekend away. One of our favourite spots was at a Caravan Club CL very close to Frensham Ponds in Surrey. No electricity of course; neither were there toilets or showers but at the equivalent of 12½p per night, it was fine. On other weekends we went to Kings Caravan Park at Pevensey Bay. That was an all “bells and whistles” site where we were charged a whacking £1 per night!

By 1970 our ‘new’ Cortina had required extensive welding on the rear chassis members because they were rusting from the insides. I became so fearful of its weakness around the towbar area that I decided it would have to go. Because I was well into DIY house renovation, I bought a two-year-old Transit panel van. First I set about installing windows; then we wanted bench type seats which would convert to a bed; then a sink and gas hob followed, and finally a raised roof. By this time, we were a family of four and we used our ‘motor caravan’ for our first ever venture abroad, just across the channel and down the coast from Calais. We used the Transit mainly as a tow car for the next six years, before changing to another Transit – this time with a diesel engine. And the process of conversion to motor caravan began all over again. In 1979 we took our caravan to France for the first time towed by the Transit. We stayed at the campsite in the Bois de Boulogne in Paris for a few days before moving on to Brittany. After two weeks we returned to Calais and caught our Townsend Thoresen ferry back to Dover. By 1982 we were really taken with touring in France so we said goodbye to the Transit and bought a new Ford Sierra Estate – with a 2.3 Peugeot diesel engine.

For the next three years, the four of us caravanned during every school holiday and for part of the summer holidays, we took the ferry to France. By 1985 with my wife only doing part-time work, when I was offered redundancy, I accepted but was immediately invited to return to work every Monday of each week. I quickly realized how restricting it was on our touring plans. At the end of the year, I resigned. And we were free to go away as and when we felt like it. In part celebration, after 18 years we said goodbye to our well-loved Sprite Musketeer and bought our first Avondale

During the next ten years, with the girls no longer reliant on us we began to plan longer tours abroad. Apart from the ferry, nothing was booked – we just went. Sometimes to Switzerland, sometimes to Italy, sometimes to Northern Spain. In 1991 it was time to consider another change of tow car. At the time, Citroen was winning the Caravan Club’s Tow Car of the Year with their diesel BX’s, so it was a new Citroen BX–TZD Estate that I decided to have. And my love affair with Citroen diesels continues to this day.
For some time we had been looking at the idea of caravanning during the winter months in Spain, so for January of 1995 I booked P&O’s Pride of Bilbao and from that port, journeyed down to Malaga where we stayed at the site in Torremolinos. Showers and toilets were dreadful but it had electricity and water so we managed. The following year we did the Bilbao ferry again but this time, I drove to Camping Bon Sol at El Campello, near Alicante. We enjoyed it so much that we did the same site the following year. By 1998, I considered that P&O’s Bilbao fares had become too expensive – even for us as shareholders, so for that year I used the Dover/Calais crossing and drove through France, which I did for the next fourteen years. Sometimes with P&O, sometimes DFDS and sometimes on the tunnel. We tried most destinations ranging from Alicante round to Albufeira in Portugal. But our preference became the Costa del Sol.

In 2011 disaster struck. We had enjoyed two fantastic months in Spain. December was spent near Estepona, January at Torrox and in February at Marbella. Just before the move from Torrox, Sheila became troubled with a low-down, nagging back pain. Then after the move to Marbella, the pain increased so much so that we had to seek medical advice. We saw several doctors who charged high fees but only prescribed pain killers. Finally, we got her into a private hospital where investigations took place over the next week or so. Unfortunately, she picked up a hospital infection which quickly developed into pneumonia. Sadly, it brought her life to a sudden and unexpected end. I went home on my own, and her coffin arrived three or four days later.
Our caravanning days were over. The caravan was sold; all the equipment was got rid of. Everything went.
But as the months went by, I began to wonder if I’d made an expensive mistake. After all, even when one has lost loved ones, life still needs to go on. When my daughters mentioned that in August they were going to a rented cottage in Dorset, I realized that if I had my van I could have joined them at the nearby Caravan Club site. I quickly looked around and on the CC’s website, and I found my present Avondale.
Now, at 90 years old, I still tow the van to Spain for four winter months and get away with the caravan during the summer in the UK as and when I feel like it.
Although we never ventured abroad without full insurance cover, were it not for the fact that I was able to turn to the Caravan Club’s Red Pennant for help and advice in February of 2011, I would have been in serious financial difficulty.
When a UK citizen dies in another country there are many formalities to be gone through. The death must be recorded at the local British Consulate and local death certificates and translation obtained. If the body of the deceased is to be taken out of the country, embalming must be arranged for and the necessary certificates obtained. Finally, transport and customs declarations must be arranged. All this to be done when one is feeling bereft. Because of my Red Pennant policy, the Caravan Club’s agents in Spain arranged and paid for all of this; also for the chauffeuring of my vehicle back to the UK; my flight home; my phone bills and all the medical expenses. 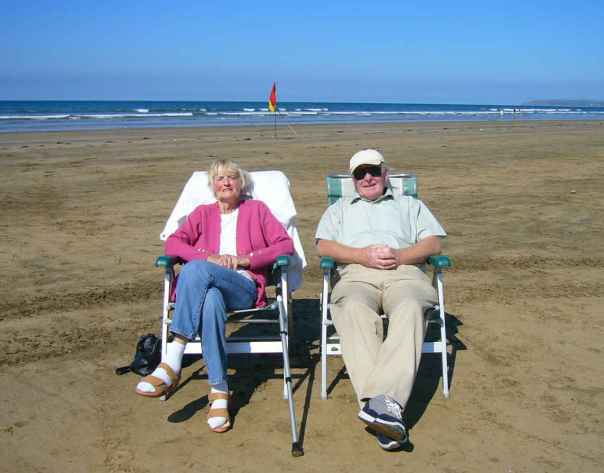 Now that I’m into my 93rd year, I think my days of trotting off to Spain for the winter are over. It’s brought to an end a continuous run of twenty-five winters. Of course, Covid has been the final straw. Had it not been for the pandemic, I would certainly have got one more winter there. But now, age issues have finally caught up with me. At the moment, there’s nothing that will stop me me from caravanning in the UK, but I guess for foreign travel, the underwriters would not be too anxious to give me a quote for medical insurance.